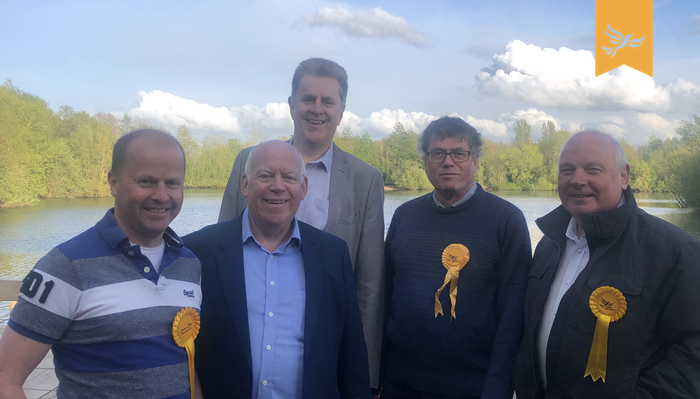 Jeff Brooks (2nd from left) has lived in Thatcham since 1980, married to Andrea with two step-children and their own son, Jonathon. Jeff ran the Thatcham Charity Show for 14 years. He was first elected as a Thatcham town councillor in 1992, subsequently serving on Berkshire County Council and, from 1997 on West Berkshire District Council. He led the Opposition for 10 years to 2015. Jeff was highly involved in getting the funding for Newbury Library. As a successful businessman, he will continue to challenge the way that the Council operates – from fixing potholes, to better procurement methods and public communication with the public.

Mark Lillycrop (centre) and his wife Jenny have lived in Thatcham for over 30 years, and their children attended local schools. He has served as a governor of Parsons Down Infant School and as treasurer of Trinity School PTA and is also a member of the KATS theatre group and an enthusiastic supporter of arts events in the area. This is the first time Mark has stood for the Town Council and, now elected, he looks forward to helping the town to develop the services and facilities it deserves to support its growing population. Mark's professional background is in IT publishing and marketing and he currently works in Bracknell.

David Lister (left) is a Thatcham town councillor, elected in a 2018 by-election that arose due to prolonged non-attendance of a Conservative councillor. David is a telecomms technology manager, resident of Thatcham, and campaigns on environmental issues.

Simon Pike (2nd from right) was until recently a Chief Engineer with Vodafone with extensive experience in the management of the radio spectrum. He now works as an independent consultant on 5G policy formulation. He joined the Liberal Democrats in 2010 because he admired their evidence-based, democratic methods of developing policy and the openness and energy of their internal democracy. Now elected, he would like to be more involved in local policy development and so assist the prosperity of the area’s high-tech industry.

Keith Woodhams (right) joined Thatcham Town Council in 1979 as a campaigner for road safety improvements. He became Mayor in 1990 and was on West Berkshire Council from its inception until 2015, representing Thatcham West. He saved a wheelchair bound neighbour from drowning in a flood and walked to Hungerford and back to raise funds for youth work. Keith has chaired WBC’s Planning Committee (Eastern Area) and been opposition spokesman on highways and transport: his passion for road safety remains to this day!