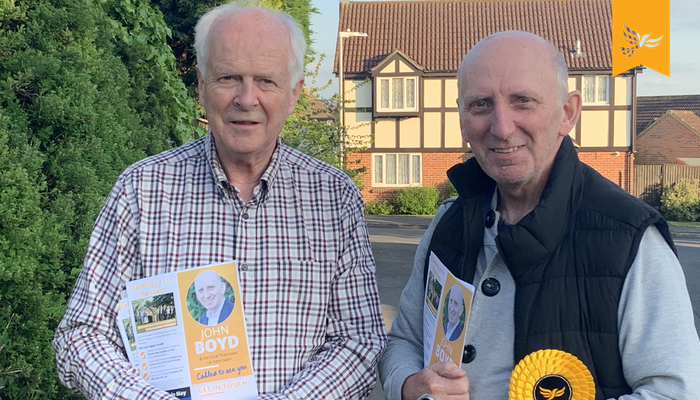 John Boyd (right) was born in Thatcham and grew up attending Francis Bailey and Kennet School. Having initially been an engineer, starting with an apprenticeship in Plenty, he is now a retired teacher who worked at Mary Hare School for 28 years where he still works part-time and also for Gowrings Mobility. John has been a Thatcham Town Councillor for 8 years and was the town Mayor in 2012. During his time on the Council John has been the Chairman of the Finance and General Purposes Committee, The Recreation and Amenities Committee and The Henwick Sports Playing Fields committee.

John cares passionately about the disadvantaged and sees the decline in the services for people with needs in the district as a major concern to those living in the community. Being a Liberal Democrat, being compassionate and caring towards others, caring about the planet and supporting the less fortunate are the basic values John lives by and for this reason he has become a Thatcham Town councillor.

John has four children and two grandchildren all living locally.

Richard Foster (left) and his wife Gill have lived in Thatcham for 33 years. Their three children attended Kennet School. A retired IT project manager, Richard recently led Thatcham Vision's travel and transport team and is a driver for Thatcham Volunteer Bureau and a driver of the Thatcham Handybus.

He is Chair of the West Berks Green Exchange and is keen to see reductions in carbon emissions and plastic waste. Now elected, amongst other things he would like to see a cycle route for leisure cyclists created between Thatcham and Newbury.

To get in touch with your Thatcham Crookham Lib Dem team on Thatcham Town Council, please email [email protected] or use the contact form below.