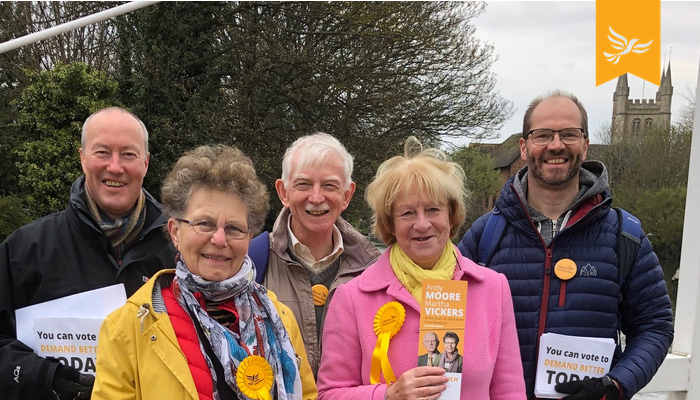 Martin Colston (right above) has lived in Newbury since 1991. Married with three children, all at St Barts, he has been self-employed in market research and business strategy since 2014, following 25 years with a global blue-chip company. He was a school governor at St John’s Infants School from 2005-15. A Lib Dem voter all his life, he joined the party in 2016 and now serves on its local Executive Committee. As a town councillor, he delivers positive changes for local people rather than being a frustrated bystander. His priorities on the town council are the market and Victoria Park.

Andy Moore (3rd from left above) has lived in Newbury for over 40 years with his children having attended local schools. An engineer by profession, his career was in Defence, including 12 years in nuclear safety regulation. He is experienced in running local organisations, volunteers with Newbury Street Pastors and, as trustee of a small aid charity, knows about supporting the disadvantaged. He contributes to competent and caring administrations and always seeks to make our society fairer. A keen cyclist, he wants to improve the walking and cycling environment in our town.

To get in touch with your West Fields Lib Dem team on Newbury Town Council, please email [email protected] or use the contact form below.

Send a comment to Martin, Nigel, Andy, Elizabeth and Martha